We don't really have pop tarts here in Chile, so one of the only ways to get them is to find specialized stores, and that is very hard... I get my pop tarts from a guy on instagram who runs a small delivery service for candy from the USA. And they are expensive! so having a pop tart is not as easy and casual as it would be if i lived in the US, making each of them a time worthy of being documented. And that's exactly what i'm doing here! 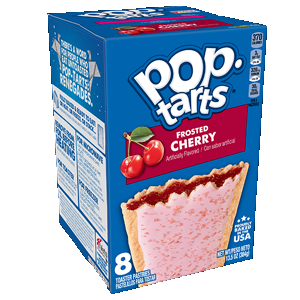 Wasn't expcecting to find a frutal flavor i liked, but here we are! I don't necesarely have a problem with fruity pop tarts, in fact some of my best friends are fruity pop tarts, so i can't be fruitypoptartphobic, right? I just don't like the fact that they're so incredibly fake. but for some reason, the cherry flavor, while feeling very very fake, has a certain quality to it that i really don't mind! it's a very interesting coughdrop-y kind of flavor, which sounds bad but it's actually very nice! if available for a good price, i think i'd definitely pick these again! 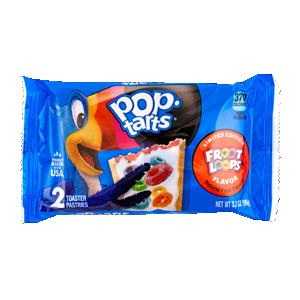 It's fruit loops! it tastes like fruit loops!! and oddly enough, i wasn't expecting that. Not only did i think that the flavor of fruit loops would be hard to replicate on a pop tart format, but i also thought it would straight up not work, even if they managed to make it happen. Something about pop tarts and sugary cereal... it just won't work in my head, even if they're both meant as breakfast foods. It really does taste like fruit loops though man, it's uncanny. The filling is a nice bright pink color and the texture is indeed creamy and soft, like a warm oreo filling. And the flavor is 100% the same as a fruit loop! absolutely amazing. If you know me, you know i like "things that taste like other things". Be it beef flavored chips, matcha flavored pocky, or in this case a toaster pastry flavored like a breakfast cereal! If you consider pop tarts to be a breakfast, this could potentially blow your mind, but i do NOT consider pop tarts a breakfast, but a candy, snack or dessert.
Presentation wise, the elephant in the room: the printed-on design. It's not sharp, but i wasn't expecting it to be. It didn't really change the flavor or texture, it was simply an added bonus. However, i feel the need to ask, or at least have this written down for posterity: Why did they go for a printed-on design? they could've SO easily just crushed some cereal on there and call it a day, it would've been much cheaper too i presume. I am however glad they did this, as i think the crushed-up cereal would've been a bit of an overload of flavor. Plus, these look stupid as all hell, i love them. The designs i got: an "i'm with sam" design with an arrow pointing to the right, and a pair of fruit loop glasses. not the most exciting, but the flavor sure got me interested in buying these again if i get the chance. 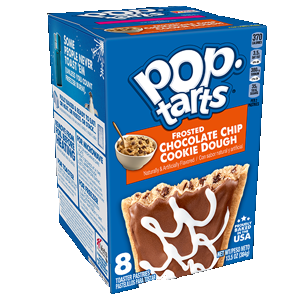 What first caught my attention when opening up the packaging was how glossy these are! all pop tarts ive tried out have an opaque glaze, but these shine quite a bit! they are not sticky however, which is both expected and good. The second thing that caught my attention was their smell. They smell exactly like packaged caramel popcorn! 100% the exact same smell! which is weird, since there's no caramel OR popcorn on this poptart, as far as i know. The experience keeps getting weirder, i snapped the pop tart in half to see how the filling looks like, and it almost looks like there's no filling at all! but then again, cookie dough tends to be of a similar shade of yellow-ish cream as the crust on pop tarts. Flavor wise... these don't read cookie dough at all. Not one bit! cookie dough, of course, has a rich buttery flavor, sweet and with a hint of vanilla, and i don't feel any of that here. I also can't see any chocolate chips in there! which to me personally isn't that huge of a problem, since adding chocolate would've made these way too sweet, which seems to be a common thing with pop tarts: the excessive usage of sugar. Now, i said these don't taste like cookie dough, what do they taste like then? i gotta say, not like much. The caramel is still in there for some reason, and i think the filling might Feel like cookie dough in the sense that it's slightly, well, doughy, but not much more than that makes these read cookie dough. With that said, as dissapointing as these are in their lack of cookie dough flavor, i actually like them! That caramel-y flavor is really nice, it works very well with the buttery crust and the "doughy" feeling filling. The glaze adds a nice crispness that is much more present in this pop tart than in others, and the texture of the filling is pretty interesting too! some pop tarts have gooey centers, some others are paste-y, some are gritty, this one is the most unique in the sense that it really does feel like dough. I am dissapointed cuz i really wanted them to taste like what they're supposed to, but even with that dissapointment in mind, these are actually pretty good! 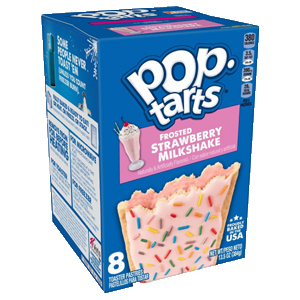 The smell of these is so strong! it definitely reads "strawberry milkshake". My main concern at first was that i'd get just a regular strawberry poptart, which isn't bad! but it isn't a milkshake. These smell milky, like artificial strawberry ice cream. Now when it comes to the taste, i was prepared to be blown away by the overpoweringly strong artificial milk flavor, but it's actually not as strong as its smell. It tastes very similar to a strawberry glaze on a donut actually. It's rather mild on its strength, but it makes up for it on sweetness. I personally don't like how sweet they are though? i think these would benefit a lot if they were less sweet and more intense. I'll give them this though, these are Definitely strawberry MILKSHAKE pop tarts! the milky, icecream-y flavor is there, and it's definitely an interesting experience. WAY too sweet for my taste though. I still have that "sugary burn" in my throat, and it's been about 3 minutes since i took my last bite! With that said, these are kinda nice! i'd actually recommend these untoasted. I feel like warming them up brings up the sweetness even more, which, in such a sweet pop tart, isn't that good of a thing. 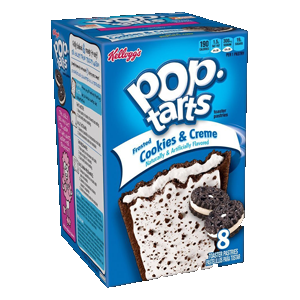 I thought these were going to be overpoweringly sweet, but i'm actually surprised, these are pretty well balanced! however, the chocolate cookie flavor, which i was expecting to be the most forward, is barely there... it feels more like a very faint hot cocoa mix flavor. I really do wish it was stronger... The "creme" flavor is stronger and more prevalent, and i think they did nail the "cookie filling" flavor. That sort of very artificial vanilla, a very fatty kind of filling that feels almost entirely made out of some sort of shortening, it's pretty good! i wouldn't qualify these as a favorite though, they are pretty mid. They got pretty close to nailing that cookies-and-cream flavor though, so i'll give them that! 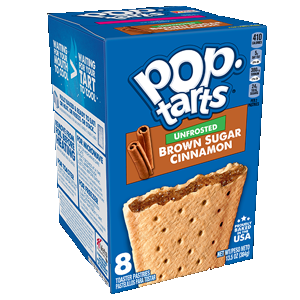 These apparently are very divisive in the Pop-Tart Community, my partner HATES them but a friend of mine thinks they are the BEST flavor. So of course i had to try them out and see it for myself. I was sort of dissapointed, this is a pretty mid-tier poptart! I was expecting to love them to death or hate them with everything i got, but these are pretty inoffensive and just, regular... I like the kind of floral cinnamon they used as opposed to a spicy or a woody cinnamon, it works very well with the buttery crust. The filling does feel gritty, so the sugar aspect is definitely present, even though i do wish it felt more like brown sugar. I don't get a lot of that molasses flavor that would've worked very well with this. I'm glad these are unfrosted, i think frosting would've made them way too sweet, and they are very sweet already! however, i do wonder how these would be like if they branded them as a "cinnamon roll pop tart" and added a cream cheese flavored glaze. That would've been cool i think! but as they are, they aren't the best thing ever, but they're still good! definitely the pop tart you'd eat when you don't want to have too much sugar. They're still not healthy at all so keep that in mind. 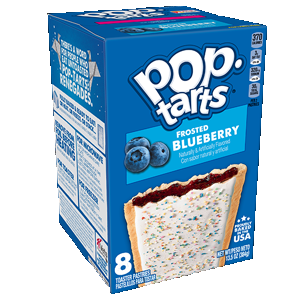 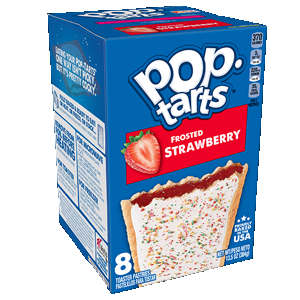 Now, while strawberry makes sense in a pop-tart, i don't think i'd get these again if other options were available... The reason behind that is because whenever i'm in the mood for a fruit-based snack, it means i want something relatively healthy, and pop tarts are certainly not healthy. The strawberry flavor feels much more like mashed-up fruit candy made into a jam, which is great as a candy! but not as a fruit-based snack. the strawberries taste almost like cough syrup. Don't get me wrong, these are nice! but they're just not something i'd pick up again if other options were available. 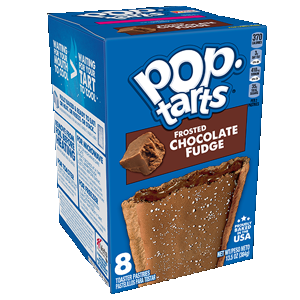 The fudge pop tarts are pretty good! they are slightly reminiscent of the s'mores pop tarts, but they lack the depth, texture and overall flavor and Experience the s'mores ones had. So they definitely get a bit of a score-cut there. if there are no s'mores pop tarts in sight, i might go for these if i'm craving chocolate. But you should be aware that these are not as good. It's like they're trying to be something they're not, and not even tryin that hard. Ouch, that sounds overly harsh, these are not that bad actually! but they are no s'mores, i'll tell you that much. 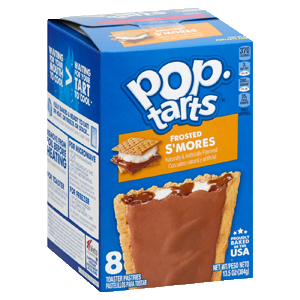 Now THIS is a pop tart... don't get me wrong, even though this was the first pop tart i've ever had and the flavor is slightly (very slightly) nostalgic for me, that's not the reason why i like them as much as i do. A pop tart is candy basically. It's not a breakfast or a meal replacement, it's a sugary snack that you'd have instead of, say, a snickers bar or something like that. It disguises itself as a healthier alternative because of the fruit options, but don't be fooled: it's still candy. Or a pastry-based candy if you're a purist. The sooner pop-tarts as a company realizes this, the better pop tarts they'll make. THIS is candy! and an incredibly good candy at that. Chocolate and marshmallow filling, nicely frosted yet not too sugary (but still PLENTY sweet), this is a great flavor profile. The crust feels like it was meant to hold these two ingredients inside of it, and if you warm it up in the toaster (as, in my opinion, you Should do with pop tarts), everything gets every so slightly molten, and it just... it makes for the perfect candy. This is pretty much the bar with which i measure all other pop tarts.